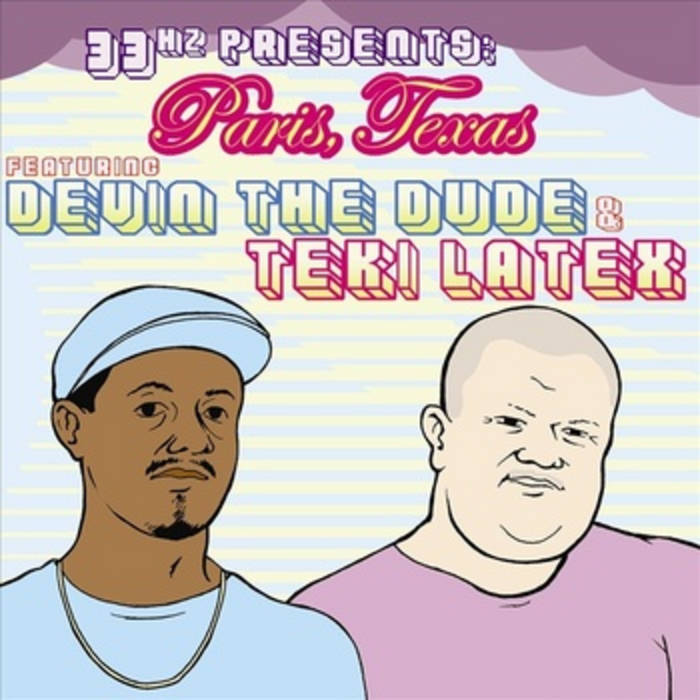 After releasing their debut album, 33Hz decided to have some fun with their next project. As big fans of Dr. Dre's Chronic 2001, they tracked down Houston's Devin the Dude and invited him to visit their studio, while he was in New York for a show. After countless spliffs and a long head bobbing session to Yes's Fragile, they were able to persuade Devin to drop a rhyme on their new track.

Fast forward to Paris, France spring 2006 and 33 Hz has been invited by Mr Teki Latex of the French hip-hop crew TTC to play their debut European show at the illustrious Le Paris Paris. The show was grand. Of course, talk soon turned to the Devin track, and 33 Hz saw a chance to unite two greatly lyrical talents from across the Atlantic.

The result was Paris, Texas, featuring Devin the Dude and Teki Latex, a showcase for two of the finest rappers from each hemisphere, and a chance to get some of the group's good friends to show their production skills thru a varied collection of remixes.

Devin the Dude first achieved fame as a member of the Odd Squad on famed Houston label Rap-A-Lot, which featured Geto Boys, Scarface, Too Much Trouble, and Convicts . He achieved worldwide fame on Dr. Dre's Chronic 2001. His latest album, Waiting To Exhale, was released in March, 2007.

Teki Latex is a Paris, France based electronica, dance and hip-hop artist, working both independently and as part of TTC. The colorful music video for his 2007 collaboration with Lio, Les Matins de Paris, has become an international internet favorite. His debut solo album, Party de Plasir was released on Capitol on June 4th 2007.

33Hz is one of New York City's best-known electro-pop acts. After garnering an international following with their first record, 33Hz (Outlook Music), the group's notoriety has ballooned thru My Space, high profile radio plays and remixes.